The founder of the Radhaswami Faith was an incarnation of the Supreme Creator, Radhaswami Himself. He manifested Himself in a respectable family of Khattris at Agra in 1818, and was known by the name of Shiv Dayal Singh. At the age of five, he was sent to school where he learnt Hindi, Urdu, Persian and Gurumukhi. Later he acquired proficiency in Arabic, Sanskrit and Persian and wrote a book in Persian language. Deep religiosity became evident in Him from early childhood and he started regular spiritual practice expounded in the Radhaswami faith, at the age of six.

Shiv Dayalji was selected direct from school to act as a Persian expert in a government department, but he gave up this job and took another as a teacher of Persian with a talukdar of Ballabhgarh estate where he had to go for only two hours daily. His spiritual cravings, however, were so intense that worldly attainments no longer attracted him and he gave up even this lucrative job. He returned home for devoting his entire time to religious pursuits.

Soon His reputation as a great spiritualist and saint spread far and wide. Even when he was a boy, he delivered discourses on metaphysical topics. High philosophical ideas and spiritual sermons delivered by an adolescent amazed the people who listened spellbound. Soon a large number of sadhus, faqirs and seekers after truth flocked around him. He met many challenges from prominent ecclesiastics of the day with remarkable success. He was able to convince most of them about the superiority of the spiritual truth revealed to Him.

His gracious and serene personality and extraordinary powers of sanctity and holiness left a deep imprint upon many a learned men who became His ardent followers. On the request of His most beloved disciple, Rai Saligram, he laid the foundation of the Radhaswami Satsang on Basant-Panchami day in January 1861. Now he became famous by the name Swami ji Maharaj. The Satsang grew rapidly and the number of devotees in his life-time rose to three thousand, which included men and women from all the major communities of India. For full seventeen years He presided over the Satsang meetings at his residence, Panni Gali, Agra.

In this incarnation of the true Creator all the actions were regulated by the currents coming direct from the Supreme Creator Himself, as in the state of somnambulism, all the functions of body and senses are performed from a plane higher than that which the soul occupies in the wakeful state

He departed from this world on June 15th, 1878 on a predecided date in a unique and most dignified way. He compiled two works in vernacular upon Radhaswami Faith, one is Sarbachan in prose and the other Sarbachan in verse.

The only true successor of Swami ji Maharaj deputed as per the last utterings of the latter was His chief disciple, Rai Bahadur Saligram Saheb. He was born in a kayastha family of Peepal Mandi, Agra, on 14 march 1829. He served as chief inspector of post offices in India, and in 1881, promoted as the Postmaster General of the North Western Provinces with headquarters at Allahabad. He was the first Indian to hold this coveted post.

His undivided and extraordinary devotion towards Swami ji Maharaj attracted wide attention. Once upon the time, when Swami Ji was asked about Salig Ram, He stated 'I do not know if I am his guru, or he is mine.' The satsang of Salig Ram Maharaj exploded with disciples from all over India, including a Viceroy. Salig Ram wrote several volumes of popular books on Radhaswami Faith. For twenty years (1878-1898) He served humanity at large and spread the divine light of love which he had received from His master. He left for his heavenly abode on December 6th, 1898.

One of his chief successors was Maharshi Shivbrat Lal Maharaj who started His satsang at Allahabad (U.P.). He was born in Bhadoi Distt. of U.P. State. He was a post graduate and edited tens of spiritual periodicals and authored almost 3000 books in Hindi, Urdu & English in his life time and travelled many places in India and abroad for the service of humanity. He departed from this world in Feb. 1939.

One of his successors was Ram Singh ji Armaan, who was born in a Yadav family of Jui Village, Haryana. He was initiated by Maharishi ji on July 18th, 1920 in Lahore (now in Pakistan) He was a teacher by profession. He devoted most of his time in Surat Shabd Yoga, and wrote a very popular book 'Armaan Sagar'. In 1930, when he went to Allahabad to have darshan of his beloved Master, Maharishi ji said to Him that I am very happy with your spiritual progress. Now onwards I depute you as the Saint of Haryana, and you may now start initiating the seekers. But Armaan Sahab requested 'I am not sure that I can perform such a great job', upon this Maharishi ji said "Don't worry, start your work and my full spirit force has already come in your area to help you and It will expand your satsang to thousands of times, these are my words to you, wait for It."

Again on 31.07.1935, Maharishi ji authorized Armaan Sahab for initiation via a post. Armaan Sahab lead a simple life and did not start any Ashram in his life. He was a real hermit and lead a life of quietude. He presided over the Satsang meetings in his small house only, in the village. He arrived on this planet on ninth of Ausouj (month by Indian calendar) and chose the same date in 1976 for departure from this world and revealed this decision three days in advance. On this foresaid date He left His body in meditation.

The full spirit force of Maharishi ji manifested in 1925, in the form of Param Sant Tara Chand ji Maharaj, in a very poor family in village Dinod in Haryana. His spiritual cravings were very intense and started his search for the Supreme creator in the age of six only. He liked the company of the mystics & saints very much. He visited almost all prominent mystics of his time. He did not even enter into marriage institution and remained celibate for whole life to achieve his Supreme goal. He developed some supernatural powers even before he met his Master. After initiation he remained in continuous meditation for days together. Love of Armaan Sahab for Him was the deepest ever known in the history of Santmat.

Name and fame of Param Sant Tara Chand ji Maharaj as a True Saint spread not only in all parts of this country, but in many other countries also, including European States. He departed this world on Jan 3rd, 1997.

His successor, Param Sant Kanwar ji Maharaj, the present Master arrived on this planet on March 2nd, 1948. His mother was a lady of high spiritual eminence. He is a post graduate in Political Science from Jaipur University. His spiritual fervent cravings brought Him in this Ashram in the young age of thirty. His very first meet with His Master produced a great phenomenal effect upon Him that He then did not return to his home and declared that I will breathe my last in this Ashram only. His services to the Holy Feet of His Master for almost 20 years and for this satsangs are among the rare examples in the history of Santmat. He devoted days and nights in meditation and authored four popular spiritual books. He also served the education department of the state as a Senior Teacher for almost thirty years. In 1997, after departure of His Master, He resigned from his government post to carry out the holy job assigned to Him. Like all previous saints, He does not spend a single penny of the satsang trust for his personal use. He however,donates the surplus money to the satsang from the pension He receives. Now like other true saints, countless miracles are attached to His name. He leads a very simple life and is easily approachable even to the poor. He has got a serene personality and is providing eternal peace to millions of seekers of the Supreme Truth in India and abroad by his splendid powers of sanctity. If anybody wants to realize the Supreme force, here and now,with certitude,he/she must seek His blessings and initiation. He is using the same Holy Name (single name) and method of initiation which was used by the august founder saints in Agra. His discourses are a simple chat even a street man can easily grasp these. His perseverance has given an all-round progress to this satsang in span of fourteen years. 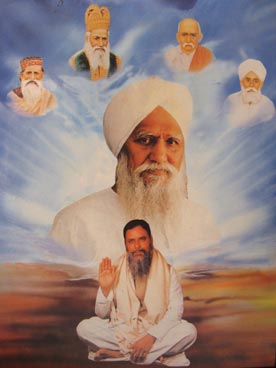